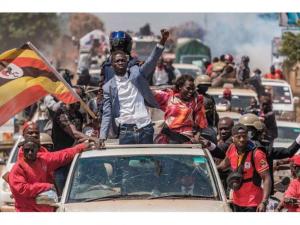 Across opposition strongholds in Uganda's capital, the reaction to President Yoweri Museveni's contested re-election has been muted, with his rival's supporters too fearful -- or dispirited -- to take to the streets.

With their leader under house arrest, and soldiers still out in force, backers of presidential runner-up Bobi Wine have been waiting and watching in nervous limbo since the opposition decried the January 14 poll as a "sham."

"Everyone here is scared," said Eva Nabadda, a 32-year-old restaurant owner in Katwe, a slum in Kampala that like the rest of the city, voted overwhelmingly for Wine and his National Unity Platform (NUP).

"If the police identify you as a Bobi Wine supporter, they'll arrest you. We fear that if we come out to protest, all eyes are on us," she said.

Wine, a 38-year-old singer turned lawmaker whose real name is Robert Kyagulanyi, came a distant second in the race against Museveni, a 76-year-old former rebel leader who won a sixth term with an outright majority.

Museveni won 58.6 percent of the vote, with Wine runner-up with 34.8 percent, according to the electoral commission, which put turnout at 57.2 percent.

The opposition leader has urged his supporters to reject the results but has not spelt out how.

He has stopped short of calling for protests as his party vows to resist the outcome using every legal means possible.

His home remains surrounded by security forces, and he has not been allowed to leave since voting day.

Visitors -- including the US ambassador to Uganda -- have been turned away.

State attorney Martin Mwabusya told a Kampala court on Thursday that Wine was not in custody but at his residence, with police "giving him the necessary protection".

"For standing and defeating Gen. Museveni in an election, which he resoundingly rigged, I am still under house arrest 8 days later! I thank all friends in Uganda and abroad who continue to stand with us, until we put an end to this indignity. Uganda will be free," Wine tweeted on Thursday.

But in the Kampala suburbs that threw their support behind the political upstart -- NUP won eight of the city's nine constituencies -- the path forward is anything but clear.

Some cling to faith that Wine, once able to speak freely, will launch the non-violent protest he promised should the opposition deem the election to be unfair.

"He is not allowed to talk to us. I know if he was allowed to move, we would be on the streets demonstrating, and the electoral commission would change the results," said 26-year-old Jonas Ayebazibwe, a street hawker.

But for others, resignation has set in.

Museveni, a former rebel leader, has ruled without interruption since 1986, and most Ugandans in the overwhelmingly young nation have never known anyone else in power.

The veteran leader has survived other popular challenges to his 35-year rule, from dogged campaigning by long-time opposition leader Kizza Besigye, to large-scale public demonstrations against rising prices in 2011.

He also has a loyal and powerful security apparatus at his disposal, one not afraid to use bullets to put down protests. In November, over two days of demonstrations against Wine's arrest, at least 54 people were shot dead.

Wine claims to have ample evidence of ballot box stuffing and other forms of vote rigging, but an internet shutdown thwarted efforts to make this public. The blackout was lifted this week but further proof of irregularities has not been formally released by his party.

The electoral commission said Thursday it was investigating the veracity of videos circulating on social media showing what appeared to be pre-ticked votes being shoved into ballot boxes.

"In Uganda, once a leader is announced, no amount of protest will change the results. It will be a waste of time to protest," said Beatrice Namuli, a 40-year-old housewife with three children.

"Even when Bobi goes to court, the results will not change. Better to wait for Museveni's five years to end, and when he comes back to contest we will support him."

Vincent Mukasa, a 28-year-old volunteer with the NUP campaign, said he was confident Ugandans would march if Wine issued the call, even if apathy was setting in.

"The problem is Ugandans prefer sitting on the fence when we are faced with a problem," he said.

"But people believe in Bobi, and if he showed up on streets, I know even those scared will join."