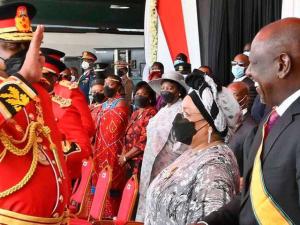 President Uhuru Kenyatta and President-elect William Ruto Wednesday rallied MPs in their respective political formations ahead of today’s crucial vote in Parliament, their final political contest before the transfer of power on Tuesday.

The election of National Assembly and Senate Speakers will determine the control of the Houses, hence the aggressive mobilisation by President Kenyatta’s Azimio la Umoja One Kenya Coalition and Dr Ruto’s Kenya Kwanza Alliance.

Bungoma Senator-elect Moses Wetang’ula, who is being fronted by Kenya Kwanza, will face off with former Speaker Kenneth Marende in the battle for Speaker of the National Assembly.

Meet ambitious 30-year-old seeking National Assembly Speaker’s post
In the Senate, former Vice-President Kalonzo Musyoka is up against former Kilifi Governor Amason Kingi, who has been endorsed by the President-elect.
The two rival coalitions are also tussling for the deputy Speaker posts in the two Houses.

Deputy Speaker
Dr Ruto has backed Uasin Gishu Woman Rep Gladys Shollei to battle it out with Dadaab MP Farah Maalim of Azimio for the National Assembly deputy Speaker position. The latter is seeking to recapture the post, which he held between 2007 and 2013.
In the Senate, Kilifi Senator Stewart Madzayo (Azimio) will compete against his Meru counterpart Mr Kathuri Murungi (Kenya Kwanza).

Lobbying for Siaya Speaker heightens as four declare interest
On Wednesday, President Kenyatta and Mr Raila Odinga rallied Azimio lawmakers to ensure they clinch the Speakers’ positions. The President said Azimio’s unity of purpose will be tested today during the vote.

Speaking during an Azimio Parliamentary Group meeting in Kajiado County, President Kenyatta told the lawmakers: “Do not be bought with a few coins, stand with the people and Azimio.”

And at the Karen official residence of the Deputy President, Dr Ruto told MPs affiliated to Kenya Kwanza to ensure the alliance’s candidates win to assure his administration’s agenda smooth sailing in Parliament.

Bungoma in campaign mood as Wetang’ula eyes Speaker
“He (Dr Ruto) is keen on housing projects, which he wants us to push for him through legislation. Secondly, NHIF (National Health Insurance Fund) will be the first business as the term of the 13th Parliament commences tomorrow (today),” said Emgwen MP-elect Josses Lelmengit.

After today’s voting, the Kenya Kwanza lawmakers will on Friday and Saturday meet to consult on the other House leadership positions.
“We are going to retreat to decide on who will be the Majority Leaders and their deputies in both Houses and who will be in which committees because we are a team that is managed through consultation,” Kimilili MP-elect Didmus Barasa said.

Marende’s past record
Sources told Nation that by fronting Mr Marende, Azimio seeks to exploit his past record as a unifying figure who steered the House in a time of major political divisions sparked by the disputed 2007 presidential vote, as well as to appeal to MPs from the Western region, where Mr Wetang’ula also hails from. Azimio is also using the same strategy in the Senate, where it has fronted Mr Madzayo for the deputy Speaker’s position as they target votes from the Coast.

Numbers in both Houses, however favour Kenya Kwanza, which has 179 MPs in the National Assembly against Azimio’s 158. A majority of the 12 independents have also allied themselves with the President-elect’s camp.
The Kenya Kwanza numbers include nine MPs from Azimio affiliate parties that have since allied themselves with Dr Ruto despite pre-election deals with Mr Odinga’s coalition.

Registrar of Political Parties Anne Nderitu, in a letter dated September 7 to Suna East MP-elect Junet Mohamed, said parties such as Maendeleo Chap Chap led by Alfred Mutua, Pamoja African Alliance of Mr Kingi, United Democratic Movement and Movement for Democracy and Growth of Ugenya MP David Ochieng are all still members of Azimio. The letter has been copied to the Clerks of the National Assembly and Senate.

Meet the new power brokers at State House
Ms Nderitu, however, said the parties had already filed petitions in court regarding their membership in Azimio.
“Additionally, in line with the provisions of Article 88 (4) of the Constitution, this office is in the process of computing the performance of political parties in the preceding general election and shall share the same in due course,” reads the letter.

Majority coalition
The interpretation, though not compelling during a secret vote, might only be useful in determining the majority coalition in the National Assembly for the purposes of allocating the Majority Leader posts.

Yesterday, Mr Wetang’ula was confident of victory. “I want to urge all the MPs who will be the voters tomorrow to exercise their due diligence and discretion and vote for yours truly to bring transformative leadership to this House and carry on the good work done by my immediate predecessor,” he said.

His main opponent is banking on his past record in the House. “I am appealing to the esteemed members of the House for their support during the elections tomorrow. I have been there before, as a Speaker, and the members know my capabilities. I promise to be a neutral arbiter when dealing with the issues before the House and ensure that the interests of the MPs and those of the country in general are given the required priority,” Mr Marende said.

New MPs
Sources at the meeting indicated Azimio will be targeting new MPs to vote for Mr Marende.
“A team has been dispatched to talk to all first-term MPs from the other camp to vote for our candidate. We will try to persuade them because this is a secret ballot and there is fear that they will be seen by their party leaders as betrayers,” said an MP at the meeting.

Azimio’s secret card to clinch Speaker jobs
In the Senate, Kenya Kwanza has 35 senators against Azimio’s 32 but since Mr Wetang’ula is not eligible to vote since he has resigned, Azimio only needs three senators for Mr Musyoka to win. “The Senators will have to make the decision tomorrow and I will leave it at that,” he said. Mr Madzayo added: “I am confident that we will carry the day ... We have done our homework and we leave it to God.”

In rallying Azimio MPs to support Mr Marende, President Kenyatta said: “Marende is the best when it comes to the welfare of members. I remember when I was the Finance minister, I would tell him that there’s no money to fulfil some of the things MPs wanted but he would tell me that is not the problem of the Legislature.”

On Kalonzo, President Kenyatta said he would make a powerful Speaker of the Senate.

Numerical strength
Mr Odinga told the MPs to use their numerical strength today to win the Speaker positions.
“We must deliver the seats and automatically get the majority leadership. With this, we will be the government. As majority, these people will need us for any legislation and agenda to go through. We will dictate everything and they will know, we know they stole elections,” Mr Odinga said.

“We have been strategising for these important positions, and it is now time to implement our strategies, which all will see tomorrow after we will have clinched the two positions in the National Assembly and the Senate,” Ugunja MP-elect Opiyo Wandayi said.

Vihiga Senator Godfrey Osotsi said they were lobbying senators from across the board and that they had made “good progress”.
“I want to tell our members who have gone astray to follow what the party stands for,” Kanu Secretary-General Nick Salat said.

“We’re not beggars and none of our members are available for sale. We will go there to do our work as we owe it to the people of Kenya who elected us,” said Nairobi Senator-elect Edwin Sifuna.

Mr Justin Muturi was Speaker of the National Assembly (2017-2022), while Mr Kenneth Lusaka, now Bungoma governor was Speaker of the Senate over the same period.
The two Clerks of Parliament, Mr Jeremiah Nyegenye (Senate) and Ms Serah Kioko (National Assembly, acting) will be the returning officers during the election of Speakers and their deputies.
https://nation.africa/kenya/news/politics/uhuru-and-ruto-last-duel-3940788