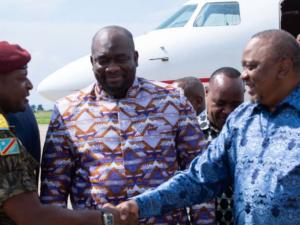 The East African Community (EAC) is engaged in the search for peace in the Democratic Republic of Congo.

A day after the arrival of Kenyan troops in Goma, North Kivu, former President Uhuru Kenyatta arrived in Kinshasa where he is to stay for two days. The EAC facilitator is accompanied by East African Community Secretary General Peter Mathuki.

Advisers to the chairperson of the East African Community heads of state summit and President of the Republic of Burundi, H.E. Évariste Ndayishimiye, have also been invited to the talks.

The Eastern bloc authorities are preparing for the third round of the Nairobi dialogue, which will bring together the Congolese government and Congolese armed groups.

"The former Kenyan president will also meet the presidents of the two chambers of parliament (National Assembly and Senate), members of the government, diplomats and representatives of local communities, leaders of religious denominations, traditional chiefs and women's associations of the provinces of Ituri, North and South Kivu who have travelled from Kinshasa to meet and exchange with the team of President Uhuru on Monday," reads a statement from President Tshisekedi’s office.

This will be an opportunity for Mr Kenyatta to talk with the communities and understand what they think after so many years of war.

The meetings are being held against the backdrop of an intense war between the M23 rebels and the Armed Forces of the Democratic Republic of the Congo (FARDC) in North Kivu.

For the East African leaders, the parties involved must favour dialogue to achieve peace.

The DRC authorities say they have a "double strategy": diplomacy, but also war to impose peace.

President Tshisekedi on Saturday welcomed President João Lourenço, the Angolan head of state and mediator of the Luanda negotiations.

João Lourenço was in Kigali on Friday to meet President Paul Kagame, again in the search for peace. For the moment, despite the increasing number of meetings, the resolutions of the Luanda roadmap, in particular the ceasefire in the theatre of war, have remained a dead letter.

In the DRC, many Congolese reject the idea of dialogue with the M23.

Kinshasa has already set its conditions, including the withdrawal of the M23 from their positions.

Martin Fayulu, a very vocal opponent of Félix Tshisekedi, also believes that Congo "should not dialogue with the M23". He proposes to talk with Rwanda, Uganda and Burundi "so that they withdraw their soldiers from the DRC".

Fayulu also rejects the deployment of Kenyan troops in the DRC. According to him, "this deployment is a big joke".

Almost the entire Congolese public opinion does not want to see DR Congo in talks with the M23. With one year to go before the general election, the authorities are sensitive to national opinion.