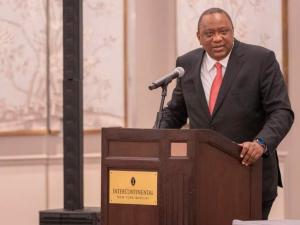 Kenya's President Uhuru Kenyatta on Tuesday rejected the decision by the International Court of Justice to redraw the maritime boundary with Somalia, setting a stage for further diplomatic tensions.

Reacting to the ruling that ordered the boundary be based on a line of equidistance, rather than the parallel line of latitude, President Kenyatta said the verdict was “zero-sum” and Kenya will neither accept nor recognise it.

The Kenyan leader said he will not, in the aftermath of the court’s decision “intend to abrogate my solemn oath; and, I will do everything possible as President and Commander-in-Chief, to preserve the territory of this our great Republic and bequeath the same, intact and unencumbered.”

The decision, he argued, embodies “a perpetuation of the ICJ’s jurisdictional overreach and raises a fundamental question on the respect of the sovereignty and consent of States” to international judicial processes. “In fact, Kenya doubts that any State would have appeared at all in a case such as this.”

“Kenya, therefore, calls on the international community to create an enabling environment for the pursuit of a negotiated settlement. This decision is, in the circumstances, a zero-sum game, which will strain the relations between the two countries.”

The ICJ on Tuesday ruled that Kenya and Somalia had not agreed on a maritime boundary but decided to agree to a portion of demands by Somalia, including halving its territorial claims in the disputed waters of the Indian Ocean.

The Court directed that the new maritime boundary must flow on a line of equidistance, eating away a significant chunk of waters claimed by Kenya in the previous boundary that flowed easterwards on a line of parallel latitude.

The Court sort of halved territorial claims for both, although it rejected most of Kenya’s arguments, including that there existed an agreement on a boundary.

Soon after the decision, Somalis generally celebrated, with President Mohamed Farmaajo saying the decision “exemplifies the integrity and transparency of the ICJ.”

Pressure tactics
“Merely three months after I had taken office, the Kenyan leadership started to directly intervene in our country’s political process by mobilising political groups in Kenya in order to create an atmosphere of chaos and political instability in Somalia that would ultimately lead to the withdrawal of the case from the Court,” Farmaajo claimed in a televised speech.

“After the failure of those pressure tactics, the Kenyan government resorted to direct violations of our sovereignty. The Kenyan government spent enormous time and resources in a campaign to politically isolate us, painting a distorted picture of our nation to our neighbouring countries, the continent as a whole and to the international community.”

Farmaajo did not elaborate, but Kenya had in the past sought to have the two sides resolve the maritime dispute out of court, something Somalia refused.

Oral hearings
President Kenyatta said the ruling, which came after Kenya refused to take part in the final oral hearings and withdrew the compulsory jurisdiction of the ICJ, will reverse the social, political and economic gains; “and potentially aggravate the peace and security situation in the fragile Horn of Africa Region.”

He argued the ICJ had refused to recognise the inherent rights of Kenya in defending its territory and that the Court was imposing its will where it had not been consented.

Kenya had opposed the case when Somalia first filed it in 2014, arguing there existed an alternative means to resolve the dispute. The court rejected Nairobi’s argument, saying the alternative means (an MoU) was not exclusive nor prevented parties from suing.

Under the accession in 1965, Kenya had granted compulsory jurisdiction only unless parties had alternative means, were members of commonwealth or their disputes could be resolved through other courts.

However, on September 24, Kenya withdrew the compulsory jurisdiction in totality, meaning that parties could sue it at the ICJ only when it consents. The maritime case, however, was already nearing verdict and judges went on to make judgement.

President Kenyatta though said he wants a diplomatic solution.