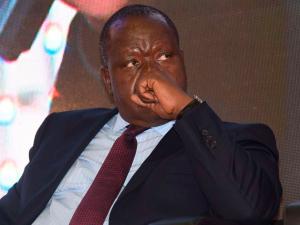 The Interior CS Dr Fred Matiang’i, who was the Super CS during the era of President Uhuru Kenyatta also attended the meeting.
Dr Matiang’i, alongside the ICT CS Joe Mucheru, Keriako Tobiko (Environment), Peter Munya (Agriculture), and Devolution CS Eugene Wamalwa were among the CS in the former administration who were leading the campaigns for the Azimio La Umoja One Kenya Coalition presidential candidate Mr Raila Odinga.

Mr Munya was missing from Deputy President Rigathi Gachagua’s event where he launched the distribution of cheap fertilisers to the country.
They were seen in several Azimio campaign rallies drumming up support for Mr Odinga.
Also, the Interior CS frequently clashed with the allies of President Ruto during the campaigns as they accused him of taking sides.

The meeting also comes amid security tension in some parts of Turkana, and Pokot Counties as the bandits attack the locals.
The National Police Service confirmed that eight police officers, a local chief and two civilians were killed in a recent banditry attack in Turkana East.

Watch: Pastor Nganga humiliates wife before congregation
The officers were in pursuit of Pokot bandits who had raided a village in Turkana East and made away with livestock.
NPS said they had dispatched a contingent of officers to restore normalcy in the already tense region.

The president condemned the attack and said that the government will not allow bandits to wage war in the name of cattle rustling, which he said will be eradicated.
This is also seen as a concerted effort from all the ministries to deal with the drought and security situation.

The president is also expected to name his new cabinet, and all eyes are on him if he will honour the promise, he made during the campaigns that the cabinet will be 50-50 gender-balanced.
https://nairobinews.nation.africa/uhurus-hardliners-css-matiangi-mucheru...