UK-Rwanda deal: Asylum seekers to arrive in Kigali in a 'few weeks' 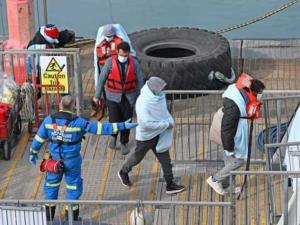 The first batch of asylum seekers sent to Rwanda from the UK under a controversial new deal will likely arrive in the East African nation "in the next few weeks", officials in Kigali said Thursday.

Since being announced last month, the agreement enabling Britain to send migrants and asylum seekers to Rwanda has attracted furious criticism from rights groups, opposition figures in both countries and even the United Nations.

According to the arrangement, the British government will send anyone entering the UK illegally, as well as those who have arrived illegally since January 1, to Rwanda.

In a statement released Thursday, Alain Mukuralinda, Rwanda's deputy government spokesman, said: "The UK has informed the 1st group of about 50 that they'll be relocated, and we expect to hear soon from our UK partners when they'll arrive, likely in the next few weeks."

Yolande Makolo, the government's spokeswoman, confirmed that the "migrants (were) likely to arrive in the next few weeks."

According to the Rwandan authorities, the British government will provide up to £120 million ($157 million, 144 million euros) to Kigali and migrants will be "integrated into communities across the country."

The proposals to relocate tens of thousands of people in the coming years, which is set to be challenged in British courts, has been slammed by rights groups as "inhumane".

Campaigners accuse President Paul Kagame's government of crushing dissent and keeping an iron grip on power, but while announcing the asylum deal on April 14, British Prime Minister Boris Johnson said Rwanda was "one of the safest countries in the world."

Kagame said last month that Kigali was not "trading in human beings" when it inked the agreement.

"We are actually helping," he said, describing the deal as an "innovation" put forward by Rwanda.

He argued that Rwanda, a tiny nation in Africa's Great Lakes region, has hosted refugees for "decades", mainly from neighbouring countries.

According to UN figures, Rwanda was hosting more than 127,000 refugees as of September last year, almost half of them children. The majority were Congolese, followed by Burundians.

The British government has sought to crack down on illegal immigration and last month, parliament passed controversial reforms which introduce maximum life sentences for people smugglers.

The Nationality and Borders Act also imposes tougher jail terms for anyone arriving illegally in the country, which has raised fears it could be used against asylum-seekers and refugees.