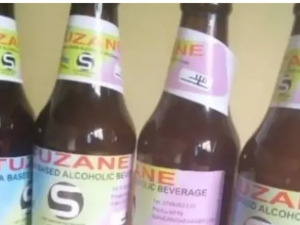 The Rwanda Food and Drugs Authority (Rwanda FDA) has withdrawn from the Rwandan market a banana-based alcoholic alcoholic drink called Umuneza, owing to adverse effects associated with its consumption, including blindness and death.

The drink was banned by the regulatory agency on Thursday, December 30, 2021.

Umuneza is made by a company called RWABEV Ltd based in Bugesera District.

The Rwanda FDA indicated that the decision was based on an inspection carried out after reports of residents who suffered severe effects including death, blindness, among others resulting from the intake of the alcoholic drink in question.

Some media reports suggest that four people in Kigali died after consuming this beverage.

“After laboratory tests carried by the Rwanda FDA which indicated that this alcoholic drink contains high concentration of methanol, the Rwanda FDA removes from the market the alcoholic drink called Umuneza and prohibits its sale, distribution, and consumption because of the effects it can have on people’s health,” the circular reads in part.

Methanol is a toxic alcoholic substance that is used industrially as a solvent, pesticide, and alternative fuel source, according to the US Centres for Disease Control and prevention.

For human, methanol is a toxic substance whose consumption is linked with severe side effects such as blindness, metabolic acidosis (develops when too much acid is produced in the body), and neural damage, loss of consciousness, convulsions (spasms and seizures), coma, and even death.

Actions against the beverage

Rwanda FDA requested the traders of Umuneza alcoholic drink to stop its sale, and take the amount of such a drink [they have in their store] to the producer upon receiving the circular.

It urged Rwandans to stop consuming this alcoholic drink in question.

The factory and wholesalers of the drink are requested to receive and properly store and report the amount of it they were given back.

Finally, local government entities are requested to contribute to informing Rwandans about this decision and its enforcement.

It is to note that on Monday, December 27, 2021, Rwanda FDA issued a circular suspending two banana-based alcoholic beverages, including Umuneza and Tuzane over suspected health effects on consumers.

Bienvenu told The New Times that the Rwanda FDA, the Rwanda Investigation Bureau (RIB), and the Rwanda Biomedical Centre (RBC) were carrying out an inquiry to ascertain the health effects on the consumers of the drinks in question.

He indicated that investigation and laboratory tests are still ongoing even on Tuzane alcoholic drink and that the results will be communicated to the public.

After realising that Umuneza alcoholic beverage had higher levels of methanol than the recommended, he said that they decided to remove it from the market without waiting for all the tests to be done because chemical is harmful to life