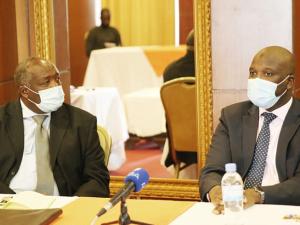 The Registrar of the United Nations International Residual Mechanism for Criminal Tribunals (“the Mechanism”) on Monday, September 28, told representatives of Genocide survivors that he is “personally not amused” when convicted mass murderers in prison publish literature negating the 1994 Genocide against the Tutsi or any other related contemptuous material.

The IRMCT Registrar, Abubacarr Tambadou, who is in Kigali for a week-long working visit stressed this while meeting with officials from Ibuka, the umbrella group for survivors of the 1994 Genocide against the Tutsi.

“I am not amused by it but I find myself in a position of dealing with consequences,” Tambadou said, in response to pertinent remarks by Ibuka president, Jean Pierre Dusingizemungu, who had listed a number of issues that continue to bother survivors.

Tambadou assured Ibuka officials that his office is concerned and is already in the process of working to ensure all such published books such as the one by former prime minister Jean Kambanda imprisoned in Mali are reviewed and appropriate action taken.

“We want to review the published books looking for any contemptuous information, for example, if they reveal information about protected witnesses and take appropriate action,” Tambadou said.

Shedding light on “the reality on the ground,” however, Tambadou noted that in the past convicts elsewhere also published books and it was permitted on grounds of freedom of expression.

But the former Justice Minister in Gambia indicated that he understood Ibuka’s particular concerns and that action will be taken.

Dusingizemungu and his colleagues also highlighted concerns regarding the early release of Genocide convicts, witness protection, the need for speed in the trial of Genocide suspect Félicien Kabuga in France, and other fugitives still on the run, among other issues.

Tambadou who has been in Rwanda before in different capacities assured Dusingizemungu and his team that “the partnership and cooperation between Ibuka and the IRMCT will only be strengthened.”

Some of the issues raised by Ibuka are not under his office’s jurisdiction, he noted, but for matters such as witness protection, he will do whatever it takes to have them addressed.

Dusingizemungu had expressed concern over witness protection noting that most witnesses in past and ongoing trials are Genocide survivors and they are often threatened.

“Protection of witnesses is absolutely an important matter for me and the Mechanism,” Tambadou said.

Tambadou also assured Ibuka, and Rwandans, that his office will collaborate in efforts to fight Genocide denial and negation.

He said: “The facts speak for themselves. They should not be distorted or negated, so that generations of Africans, and Rwandans, learn from what happened and help prevent it happening again.”

“No amount of denial can deny the fact that what happened was a Genocide against the Tutsi.”

Among others, Tambadou noted that the Mechanism is working to ensure that Genocide archives in its possession are easily accessible to anybody in a more friendly platform.

This was in response to a request by Dusingizemungu for the archives to be availed to schools and universities in form of adapted material that is easier to read and understand for students in various levels.

“It is tremendous work but I think it can be done. It is important because sometimes the material is in very hard language,” Dusingizemungu noted.

He indicated that he could not give a definite or immediate answer considering factors such as resources, his mandate and size of the Mechanism compared to the ICTR.

During the week, Tambadou will meet senior government officials and some members of the diplomatic corps also.

Tambadou, a former prosecutor at the now defunct ICTR (which was replaced by the Mechanism) was the Attorney General and Minister of Justice of The Gambia from February 2017 to June 2020.

Until his appointment as Attorney General and Minister of Justice in February 2017, Tambadou was the Special Assistant to the Prosecutor of the Mechanism between 2012 and 2017.

As Special Assistant, Tambadou supported successive Prosecutors of the Mechanism and represented the Office of the Prosecutor in the operationalization of the two branches in Arusha and The Hague.

As Trial Attorney at the Office of the Prosecutor of the United Nations International Criminal Tribunal for Rwanda (ICTR) between 2003 and 2008, Tambadou was involved in the prosecution of four senior military officers implicated in the 1994 Genocide including the former Chiefs of Staff of the Rwandan Army and Gendarmerie.

As Appeals Counsel between 2008 and 2012, he handled several appeal cases including the appeal case of Col. Théoneste Bagosora, the mastermind of the 1994 Genocide.