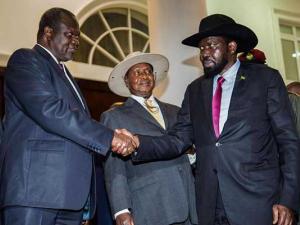 Kenya and Uganda have played roles that contribute to “a dangerous stalemate” in South Sudan, a United Nations panel of experts said on Friday

The panel reported that Uganda deployed troops in Yei River State last month, a move it described as violation of the international arms embargo on South Sudan.

Kenya, on its part, has “not demonstrated sufficient political and diplomatic will to consistently support the peace process,” the panel said in a report to the UN Security Council.

Ethiopia is criticised, along with Kenya, for failing to use leadership roles in the Intergovernmental Authority on Development (Igad) to exert regional leverage on South Sudan's antagonists.

“The government, in particular, has benefited from the inconsistent approach of the region,” the panel notes in regard Salva Kiir to administration.

“The bilateral meetings between the President of Kenya, Uhuru Kenyatta, and Mr Kiir in Nairobi on 1 and 2 July 2019 have not led to the sustained presence and pressure necessary to fully implement the pre-transitional provisions of the agreement,” the UN panel states in reference to a peace deal reached last year.

The Kenyan government has also not responded to the panel's inquiries regarding apparent violations of the UN asset freeze and travel ban on South Sudanese included on a Security Council sanctions list.

The panel says it has identified accounts in an unnamed Kenyan bank related to Malek Reuben Riak Rengu, a former South Sudan senior security official accused of overseeing the killings of civilians.

The bank has not responded to the panel's request for information on these accounts, the report says.

In addition, Kenyan authorities failed to request an exemption to the UN travel ban in the case of Gabriel Jok Riak, also included on the sanctions list for “actions that have extended the conflict in South Sudan.”

Paul Malong Awan, another individual subject to the UN travel ban, was allowed to fly from Nairobi to South Africa in July on a Kenya Airways flight, the panel notes.

Malong, a former chief of staff of the South Sudan army, returned from South Africa to Nairobi later in July on a Kenya Airways flight, the report says.

His entry on the Security Council's sanctions list states that “Malong has been responsible for the SPLA and its allied forces’ perpetration of serious abuses, including attacks on civilians, forced displacement, enforced disappearances, arbitrary detentions, torture, and rape.”

The UN panel's report was compiled prior to the lapsing of the November 12 deadline for formation of a unity government in South Sudan in accordance with a peace agreement reached last year.

But the panel's report indicated that the terms of the agreement were unlikely to be honoured.

“More than a year after the signing of the Revitalized Agreement on the Resolution of the Conflict in South Sudan, the selective implementation of and inconsistent international support for the Agreement have led to a dangerous stalemate,” the panel told the Security Council.

“The signatories have made no significant decisions regarding the implementation of the Revitalized Agreement on the Resolution of the Conflict in South Sudan,” the report added.

“A particular concern is that the government has demonstrated little interest in abiding by the letter or spirit of the agreement on security arrangements, the number of States and their boundaries, and financial accountability.

These entrenched positions have eroded trust among the signatories, imperilled the survival of the agreement and posed an immediate threat to peace and security in South Sudan.”