Unrest at Tuskys as workers go without pay for months 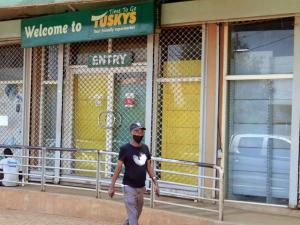 Tuskys is on its deathbed, and its survival is entirely dependent on ongoing efforts to revive the erstwhile regional giant retail chain.

Over 6,000 jobs are at risk, with a recent announcement of a Ksh2 billion ($20 million) debt from an undisclosed Mauritian fund doing little to ease mounting claims facing the retailer, including landlords who are increasingly getting impatient.

The Kenya government, which has been monitoring the Tuskys’ state of financial affairs on a weekly basis, says no “tangible” progress has been made in the turn-around efforts.

“We are obviously monitoring the alternatives and measures that they have taken to see whether they are sufficient to keep it running as they resolve the problems. Yes, things are not good. I don’t like to see businesses suffer but there is also a limit which you can try to rescue it,” said Betty Maina, Kenya’s Cabinet Secretary in-charge of Industrialisation, Trade and Enterprise Development, in an interview with The EastAfrican.

Correspondence between the retailer and the workers’ union shows desperate attempts to avert a go-slow as the employees claim pay arrears dating months back.

Senior managers are jumping ship, the latest being Patrick Mugo James, who was in charge of security and loss control, and whose exit was announced to staff on Wednesday, September 2.

The retailer has not paid thousands of its direct and outsourced employees in July and August, with salary arrears topping an estimated at Ksh320 million ($3.2 million).

In a letter to the Tuskys management seen by The EastAfrican, the Kenya Union of Commercial Food and Allied Workers (KUCFAW) queried why some employees had not been given their portion of July wages and warned the retailer against discrimination and unfair labour practices.

“ …We are inclined to inform you that you have neglected to pay July wages and salaries which are already due to majority of our members and instead choosing to pay your management staff and a bulk of the outsourced labour. This not only constitutes discrimination but also amounts to unfair labour practices,” said Boniface Kavuvi, the Union’s Secretary-General in a letter to Tuskys management dated August 19.

The retailer’s chief executive, Daniel Githua, in a letter to the Union dated August 24, acknowledged the delay in payment of July salaries, but insisted that half of the amount had been paid.

“The Tusker Mattress Ltd management regrets for the delay in payments for July 2020 salaries and wishes to clarify that it has no reason whatsoever of holding employees’ salaries,” said Mr. Githua

“… In reference to your letter, we confirm that salaries for the month of July 2020 has been paid in part up to 50 percent of the total. The same has been paid progressively and without discrimination starting with the lower cadre employees with anticipation of payment in full soonest for the remaining 50 percent.”

Mr Githua, who has attributed Tuskys’ woes to the Covid-19 pandemic, did not respond to our requests for comment.

While announcing the Ksh2 billion ($20 million) debt injection last month, the retail chain said it was still in negotiations with equity investors, who are expected to inject fresh capital into the business.

In Uganda, Tuskys has already shuttered doors to its five branches at Bugolobi, Nakulabye, Makerere, Ntinda and Kitintale, marking an end to the retailer’s 11-year presence in the market.

The chain employed an estimated 150 Ugandans.

The retailer, which is operated by Tusker Mattress Ltd, has an estimated 2,000 permanent and pensionable employees who are unionised and about 4,000 workers who fall under the category of outsourced labour from firms such as Artemis Outsourcing Ltd, Amicum and Qrisha.

A company insider told The EastAfrican that non-unionised employees falling under the category of outsourced labour and who form the bulk of the labour force have been at the sharp end of the retailer’s cost cutting measures, being compelled to go on two weeks unpaid leave each month, beginning June.

The workers union describes the financial situation at Tuskys as “very bad” and is calling for government intervention in the operation of the retail sector that has already seen the collapse of former retail giants —Nakumatt and Uchumi Supermarkets.

“Things are not good at Tuskys. We just cross our fingers and hope that the situation will improve because there are a lot of livelihoods that are going to be affected if at all it goes down. It is a high time that the government checks what is happening in the retail sector and stamp their authority,” said Mr Kavuvi,

The Union has been engaging the retail chain, as weary workers have repeatedly threatened to down their tools.

“It is a constitutional right for workers to go on a go-slow or to strike especially at this time when they have not been paid and they are expected to pay rent and fulfil a lot of other obligations. But will a strike help in the current circumstances? We are in a catch 22 situation,” said Mr Kavuvi.

The EastAfrican has also learnt that the Association of Kenya Suppliers (AKS) held a virtual meeting with Tuskys management on Thursday last week, in which the retailer promised to offset some of its debts as per an agreed repayment schedule.