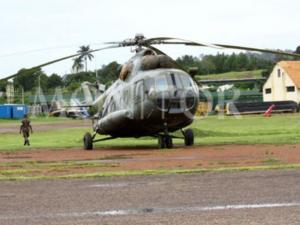 More than a dozen Ugandan soldiers died after a helicopter they were in crashed in eastern Democratic Republic of Congo during take-off.
The Mi-17 helicopter, which is mainly used for transportation, medical evacuation and VIP travel, had just delivered food consignment to the Uganda People’s Defence Forces troops engaged in Operation Shujaa.

Army spokesman Brig Gen Felix Kulayigye said, “Yes, it is true one of our helicopters crashed. I haven’t received details about the causalities.”
When asked about President Yoweri Museveni ordering an investigation into the chopper crash, he said, “every time there is an accident, a board of inquiry is established to investigate the matter and they have put up one in this incident.”

President Museveni, who is the commander-in-chief of the armed forces, ordered a board of inquiry to investigate how and why military helicopters were dropping from the skies.

Uganda People’s Defence Air Force (UPDAF) Deputy Commander, Maj Gen Charles Okidi, will lead the inquiries, according to a military radio message sent out Wednesday.
Highly-placed security sources said the tail rotor of the helicopter, which was technically on a captain-supervised flight, struck a tree, leading it to spin uncontrollably before crashing on troops collecting the delivered food.

The tail rotor is an essential component which helps to “neutralise the twisting momentum” of the main propeller to keep a helicopter steady in flight, according to the United States Federal Aviation Administration (FAA).

The instructor-cum-pilot in the Monday incident has posthumously been named as Ukrainian national Yury Vyshykvy, who died on the spot, while the Ugandan pilot Capt Patrick Arinaitwe and five crew members sustained varied injuries.
The injured are receiving treatment at Bombo Military Hospital outside Kampala, a State House source said on condition of anonymity, citing sensitivity of the issue.

The Monday crash is one in a list of military aircraft incidents in the last few years.

The worst air disaster in UPDF history, according to insiders, happened in August 2012 when seven out of 28 crew members flying to bomb the al-Shabaab in Somalia lost their lives in multiple Mi-24 helicopter crashes on Mountain Kenya. The investigation report is yet to be made public.

July 26: An Mi-24 crash-landed in Mityana District, central Uganda. The four occupants of the helicopter survived. The crew repaired the technical glitch that caused it to crash and the helicopter continued with its journey.

February 5, 2021: A helicopter, which was transporting soldiers under the African Union mission crashed soon after take-off in Balidogle in Somalia. The four soldiers on board survived the crash. They were travelling to the Lower Shabelle region in Somalia to support the troops already on the ground.

March 9, 2009: An Ilyushin 76, which was carrying equipment for Ugandan peacekeepers in Somalia, crashed in Lake Victoria in Entebbe, Wakiso District, soon after take-off from the airport killing 11 people on board. The dead included two Ugandans (a corporal and an airport loadmaster), a general officer and two other senior officers from Burundi, four Russian crew members, a South African and an Indian national.