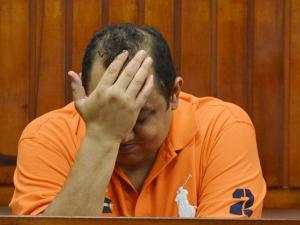 Kenyans Baktash and Ibrahim Akasha had for long presided over an international drug-trafficking ring that netted them a fortune.

It was used to finance lives of luxury in Mombasa and to systematically bribe a host of Kenyan government officials — until they were caught.

A shocking spectacle unfolded when burly US marshals led the brothers into a federal courtroom in New York in February 2017.

Rather than flashing bling, the Akashas wore prison uniforms and were handcuffed to chains wrapped around their waists.

Both would plead guilty the following year to multiple felonies. In addition to confessing to a conspiracy to import narcotics into the US, the Akashas admitted they had obstructed justice by handing out hundreds of thousands of dollars in bribes to Kenyan criminal-justice and law-enforcement officials.

Those bribe-takers have not been named in the US legal proceedings involving the Akashas.

Federal prosecutors could try to extradite them to the US to stand trial on obstruction of justice charges, but no moves have been made in that direction.

Baktash, 43, was sentenced in August to 25 years in prison for his crimes.

He was recently sent to the Federal Correctional Institution in Oakdale, Louisiana, a state in southern USA.

It is designated a low-security prison where inmates are housed in dormitory structures.

Ibrahim, 30, is likely to receive a somewhat shorter term than his brother when he is sentenced in January.

The Akashas' downfall was set in motion in November 2014 when they were arrested in Mombasa on drug charges.

At about the same time, the brothers were indicted in New York, along with two accomplices, for plotting to smuggle 98kg of heroin and a smaller quantity of methamphetamine into the United States.

But the end did not come quickly for the so-called Akasha Organisation, a drug syndicate founded decades earlier by their father.

Baktash, Ibrahim and two key figures in their network — Indian national Vijaygiri Goswami and Pakistani citizen Gulam Hussein — had managed for more than two years to avoid lengthy jail time in Kenya and extradition to the US.

They were able to continue profiting from their drug dealings during that time by paying off Kenyan politicians, judges, prosecutors and police officers.

And, three days later, they were handed over to agents of the US Drug Enforcement Agency who quickly flew them to New York, where they were held in detention facilities for nearly three years.

US authorities had apparently decided to take that direct action out of fear that the principals in the Akasha Organisation would be able to stave off extradition indefinitely.

New York-based defence attorneys argued during initial legal skirmishing that the US had no jurisdiction in the case because the Akashas, Goswami and Hussein had effectively been kidnapped from Kenya.

“They were subject to rendition, not extradition,” Mr Daniel Arshack, a lawyer representing Goswami, said in February 2017.

“It's a blow to the sovereignty of the country from where they were taken.”

In an interview with the Nation, Mr Arshack theorised that the inauguration of President Donald Trump a few days earlier may have emboldened US drug agents to act in a way that had not occurred during the Obama administration.

“I'm not saying Trump decided one night let's get those boys in Kenya,” Mr Arshack commented.

“But it's not much of a stretch to think people in law enforcement who perhaps would have previously declined to cross the line in respecting due process and the rule of law might feel enabled to do that now.”

The Kenyan government, on the other hand, claimed it had “expelled” the four from the country in accordance with its own proper procedures.

While foreign nationals such as Goswami and Hussein can clearly be deported, it is not clear whether Kenyan law permitted the expulsion of the Akashas, who are Kenyan citizens.

Mr Hamsi Salim Massa, head of the anti-narcotics unit in the Criminal Investigations Directorate, declared in a sworn submission to the US court that the Kenyan government had "ordered the expulsions of the Akasha Abdallas of its own volition”.

No US government officials played a part in the Kenyan government's "internal deliberations" and "independent decisions" resulting in the removal from the country of the two brothers, Mr Massa said.

US prosecutors, meanwhile, told presiding judge Victor Marrero that the means by which the defendants were brought to the US had no bearing on the facts of the case.

Judge Marrero ultimately sided with the prosecution. “The Akasha brothers' allegations that they were removed from Kenya before they were formally extradited do not run afoul of any provisions of the [US-Kenya Extradition] Treaty,” the judge wrote in a ruling handed down in July 2017.

The treaty does not stipulate that extradition is the only means by which a Kenyan national may be transferred to the US for criminal prosecution, he noted.

Days before the scheduled start of their trial in October 2018, the Akashas pleaded guilty to all the charges against them.

That decision reflected the assessment of defence attorneys that the prosecution had assembled a case that would be nearly impossible to refute.

It does not appear that the brothers gained anything in return for pleas that spared the US government the expense of conducting a full-blown jury trial.

Prosecutors argued in sentencing hearings following the guilty pleas that both brothers should be given maximum terms of life imprisonment.

And the 25-year sentence meted out to Baktash carries little hint of leniency.

Over an eight-month period, undercover US narcotics agents posing as Colombian drug dealers had taped their conversations with the Akashas and accomplices.

In addition to audio recordings, the prosecution could have presented clandestinely-made video tapes of face-to-face meetings involving members of the Akasha group and the disguised US agents.

In one taped telephone call, court documents indicate, Akasha drug business manager Goswami told an undercover agent that 98 “chickens” had been procured for delivery to the US.

“Chickens”, prosecutors explained, was the organisation's code word for heroin, with 98 referring to the number of kilos in the shipment.

The defence teams also knew that Goswami, 59, had been “flipped” by US prosecutors during his time in custody in New York.

Goswami would have been called in a trial as the prosecution's lead witness, and would have presented detailed accounts of the brothers' criminal activities.

As it turned out, Goswami did testify at Baktash's sentencing session.

In the course of a five-hour presentation, Goswami alleged that Baktash had arranged for the 2014 murder of a South African drug gangster known as Pinky.

And when he learnt that Pinky had in fact been shot 32 times in South Africa, Baktash was “over the moon”, Goswami recalled.

“He started playing music, dancing and shooting his gun in the air.”

According to Goswami, Pinky was targeted for death for having threatened to have the Akashas killed as revenge for beating up Pinky's boss, a South African drug lord named David Armstrong.

Goswami added in his testimony that Armstrong had been protected in Kenya by Stanley Livondo, a Kenyan businessman and politician.

As Livondo wrestled Baktash to the floor, Goswami continued, Ibrahim pulled out a gun and shouted at Livondo, “Stop it or I'll kill you.”

Shoppers fled at the sight of the gun, with some ducking under tables in fear of their lives, Goswami recounted.

Returning to their Mombasa compound, the brothers handed over their unfired weapons to Goswami, he said.

They then went to the local police station to bribe the head officer so as not to be charged in connection with the fight in the mall, Goswami told the court.

The depiction of Baktash as a sadistic thug was compounded in documents prosecutors submitted to Judge Marrero before Baktash's sentencing hearing.

The US government attorneys accused him of having murdered his former wife, tortured one of his children, contracted for the murder of his father's assassin, and concluded weapons deals with Al-Shabaab.

Prosecutors further alleged that the Akasha brothers in 2013 had got access to 10 tonnes of a chemical known as “abba” that had earlier been seized by Kenyan authorities.

Abba is used to manufacture methaqualone, an illegal sedative referred to in South Africa as Mandrax.

The Akashas were said to have bribed Kenyan officials to allow them to remove that huge quantity of abba from a government warehouse.

The prosecution offered no corroborating evidence for any of these accusations, and the brothers were not formally charged on those grounds.

But Goswami's lurid testimony and the additional accounts of violence presented by US prosecutors did succeed in influencing Judge Marrero's decision on Baktash's sentence.

The prosecution had urged the judge to “consider the full context of the Akashas' crimes” in determining how much prison time to hand out to the older brother.

And Judge Marrero said subsequently at a hearing that he was “inclined” to accept the US government's claim of Baktash's involvement in the hired killing of Pinky.

The plot to smuggle heroin into the US had not been “consummated”, Mr Goltzer argued, emphasising to the court that “not a single gramme” of the Akashas' narcotics holdings had actually entered the country.

'MY LITTLE BROTHER IS INNOCENT'

The judge told Mr Goltzer that this point had merit, and he further expressed sympathy with the attorney's contention that Baktash had been ensnared in a US government “sting operation”.

In his own oral argument, Mr Goltzer took strong issue with one of the prosecution's accusations.

“Baktash Akasha never harmed his second wife,” Mr Goltzer said in a rising voice. “Anybody who claims he did is a liar. It's a slander.”

Mr Goltzer added hat his client “feels terrible about his brother” Ibrahim having become enmeshed in the criminal enterprise.

“He didn't want his brother to take responsibility for anything he did,” Mr Goltzer told the court on Baktash's behalf.

“He thinks his brother should be sentenced to less time.” In an attempt to persuade Judge Marrero to have mercy on Baktash, the attorney added that his client suffers from diabetes, asthma and other health problems.

On his own part, Baktash apologised in a statement he made in court before his sentencing.

“I am truly guilty of these crimes, and I stand ashamed,” he said while reading from a written statement.