US criticises Uganda over torture of critics 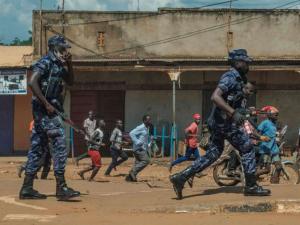 The United States has called on Ugandan authorities to end the torture of citizens and to bring to book perpetrators of these crimes.

For months, the opposition in Uganda has alleged that their supporters and other government critics have been arbitrarily arrested and tortured by the country’s security forces.

In a statement issued Friday by the US Embassy in Kampala, Washington said torturing citizens is against both the Ugandan and regional laws and offenders should not go unpunished.

“Recurring credible accounts of forced disappearance, arbitrary detention, and use of physical and mental torture of Ugandan citizens by the security forces reflect poorly on the government and undermine the constitution of the republic of Uganda, which under Article 24 states, ‘No person shall be subjected to any form of torture, cruel, inhuman, or degrading treatment or punishment’,” the statement says.

In the lead-up to Uganda’s January 2021 general election, reports emerged that armed men were kidnapping several people across the country, especially opposition party coordinators and supporters, and detaining them incognito.

Some of those that have since been released tell of horrible stories of torture in detention, and have visible torture marks on their bodies.

Others taken in a similar manner are still missing, with families unable to trace them.

The police, with the constitutional mandate to arrest suspected criminals, continues to distance itself from these arrests and alleged tortures.

However, victims, lawyers and the opposition National Unity Platform accuse the Chieftaincy of Military Intelligence (CMI) of the atrocities.

The CMI was until recently headed by US-sanctioned Maj Gen Abel Kandiho.

Another security entity singled out for these crimes is the elite Special Forces Command (SFC) tasked with the protection of the president and his family and key government installations, and was formerly headed by President Yoweri Museveni's son Lt Gen Muhoozi Kainerugaba.

Museveni, in one television address last year at the height of the disappearances, said that SFC was holding some of the suspects on suspicion of terrorism and threatening national security.

The torture debate has been rife in Uganda in the past weeks following the kidnap and alleged torture of award winning author Kakwenza Rukirabasaija, who was picked from his home by military officials after he tweeted about President Museveni and his son.

After nearly a month in detention and a court order to release him that was rejected, Kakwenza was finally released on bail with stringent conditions, including not talking about the case or his experience in detention.

He has since shared pictures of wounds on his body, reportedly due to torture while in detention.