US issues warnings over China plan for military bases in Kenya 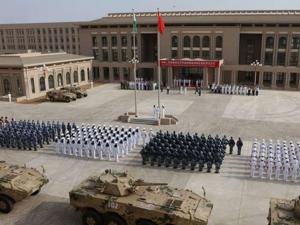 The US has raised the alarm over alleged plans by China to establish a military base in Kenya and extend its grip beyond economic and investment ties.

It claimed that the planned base in Kenya is part of China’s pursuit of a global military logistics network to counter the existing interests of superpower nations, including the US.

China opened its first military base in Djibouti in 2017, with the latter’s location on the northwestern edge of the Indian Ocean fuelling concerns in India that it would become another of Beijing’s “string of pearls” military alliances and assets, including Bangladesh, Myanmar, and Sri Lanka, ringing India.

It is China’s first overseas naval base, though Beijing officially describes it as a logistics facility.

Chinese Navy marines are deployed at the Djibouti base, along with armoured vehicles and artillery support.

“The PRC [People’s Republic of China] has likely considered a number of countries, including…Kenya as locations for PLA [The People’s Liberation Army] facilities,” said the Pentagon (US Department of Defence) in its annual report to the US Congress seen by the Business Daily.

The warning shot comes amid an arms race between China and the US hinged on nuclear stockpiles with big implications for the military power balance.

US military planners say China is expanding its nuclear forces and bases to limit America’s options in case of conflict.

By setting up a base in Kenya, Washington warned that Beijing wants to boost its military and economic influence over Kenya and other countries in Africa.

“The PRC is seeking to establish a more robust overseas logistics and basing infrastructure to allow the PLA to project and sustain military power at greater distances,” said Pentagon.

China invests huge amounts of resources in its efforts to project power.

This mainly happens through investments or direct control of key ports, airports or other infrastructure as well as promoting stronger political and diplomatic relations.

Nairobi and Washington, alongside its former colonial master Britain, have strong military engagements.

The US, for instance, has a military base in Manda Bay, Lamu while the UK has a similar base in Nanyuki.

In July, the UK renewed its multi-billion shilling defence pact that allows its troops to continue training at Nanyuki.

The new Joe Biden administration early this year also announced the deployment of American special troops to Kenya to help in counter-terrorism efforts.

China’s reported military ambitions come amid its plans to implement the One Belt, One Road (OBOR) initiative that aims to further trade with African countries.

China has been funding billions of shillings worth of infrastructure in Kenya via debt under the initiative, including the standard gauge railway between Nairobi and Mombasa.

The initiative was first announced in 2013 and is a signature foreign and economic policy launched by Chinese President Xi Jinping.

The US has, however, been increasingly vocal in urging Kenya to be wary of heavy borrowing for the projects, warning that the East African nation could be saddled with unpayable debts to Beijing for the projects built largely with Chinese labour.

The Kenyan military has remained mum over the alleged Beijing plans to set up an outpost which the US first made last year. The Kenyan military did not respond by press time Thursday to a request by the Business Daily for comment about the latest report.

But China has dismissed the claims as false.

“The information mentioned...is totally false,” Xueqing Huang, the Chief of Information and Public Affairs Section for the Embassy of China in Kenya, told the Business Daily earlier in an e-mailed response.

“Their (Pentagon) latest report is just the same as the previous fact-neglecting and bias-brimming.”

Beijing’s goal, the US report said, is eventually to leverage its new military might to achieve its foreign policy objectives and to assert itself globally.

Previously, other analysts have pointed to China’s military base in Djibouti as signalling Beijing’s geopolitical ambitions overseas.