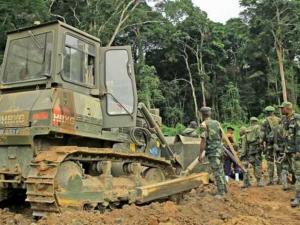 The Allied Democratic Forces, Uganda’s feared terrorist group allied to the Islamic State, has been accused of killing and maiming civilians in the Democratic Republic of Congo. So when Uganda and the DRC launched a joint military operation last November, targeting ADF, it looked like the terror gang’s days were numbered.

Today, however, the ADF are still putting up a fight, killing, kidnapping and flattening villages.

Uganda People’s Defence Forces (UPDF) admit the terrain with dense forest, the ADF’s adaptive tactics of dodging direct combat while using civilians as human shields and lack of infrastructure have combined to gift the ADF a lifeline.

“The vast and difficult terrain has given ADF a considerable latitude for survival and overstretching the joint forces operation,” he said last week, after the joint operation reported killing three ADF operatives in Ntoroko-Mboga in Ituri province, some 14km southeast of Mboga town.

For example, for a shorter access to Ituri territory Uganda deployed Ministry of Works and Uganda National Roads Authority equipment to construct a ferry to navigate River Semulik and the road to Mboga.

This infrastructure would enable the joint forces to fully occupy Kainama, Tchabi and Mboga up to Burasi, thereby liberating these areas from the ADF.

In August, the joint forces killed two ADF commanders — Juruga Ahmed from Yumbe District in Uganda and a foreign fighter only identified as Abdul from Somalia in a raid in the region, seven kilometres west of Mboga, between Malibongo and Maraya, the statement said.

And according to Maj Mugisa, ADF has been defeated in the ‘Triangle of Death’, the Eringeti Triangle and confluence of River Lusulubi, losing an unconfirmed number of fighters including foreign experts in camps and elsewhere.

This notwithstanding, the ADF is not obliterated yet. On September 19, four days after the joint forces killed three ADF commander, the ADF revenged by killing three civilians in Pointi and Maleki, seven kilometres to the northeast of Oicha in Beni territory of North Kivu, HumAngle outlet reported. The joint forces said they had also recovered an assortment of weapons, consisting of guns, machetes, ammunition, military uniforms, communication gadgets, accumulator battery and petrol.

“After clashes with the army, these jihadists fled. Unfortunately, they executed five civilian hostages.”

Uganda launched their operation with artillery and airstrikes on November 30 before infantry and mountain brigade crossed into DR Congo on December 1 last year.

Since then, the Kivu Security Tracker (KST) – a platform that maps attacks and atrocities by various militia groups in eastern Congo has documented 173 incidents of violent deaths, 82 of clashes, 103 of destruction of property and 63 incidents of abduction incidents by ADF, as of September 26.

The general security of eastern DRC is problematic, however. Last year, President Felix Tshisekedi placed the provinces of North Kivu and Ituri under a state of siege, with military officials replacing civilian administrators to stem the violence. It failed to stop ADF attacks against civilians. Other militia groups like M23 lurk around the area too.

“Operation Shujaa has become a tree that hides the forest. Apart from the first two or three days of the launch of these operations when the Ugandan army bombarded the positions of the ADF in the forest of Beni, the rebels operate as before,” says Jimmy Nzially Lumangabo, National Coordinator of Positive Generation-DRC, a civic movement.

During a recent field tour, UPDF’s Maj-Gen Kayanja Muhanga, who alongside Maj-Gen Camille Eloha Bombelle of FARDC is joint head commander of Operation Shujaa, said that after capture of their bases, ADF remnants chose softer spots on civilians.

“When ADF attacks in different directions, you would think we have been surrounded by the enemy. The rebels can split up and raid different villages, burn houses, kill civilians or burn a bodaboda on the road both for publicity purposes and to stretch the forces,” Gen Kayanja remarked.

Maj Mugisa, the Operation Shujaa spokesperson adds that inadequate — and in some places — lack of zonal forces or local defence units to protect returnees in their respective villages, has left the free ranging ADF to continue terrorising some remote areas.

Jason Stearns, director of Congo Research Group, said Uganda’s pact with DRC to intervene militarily is just a smokescreen as the real intent is a host of economic initiatives that include very lucrative contracts to Ugandan companies to rebuild roads.