WATCH: Mudavadi asks his supporters to vote out UDA candidates in Western Kenya 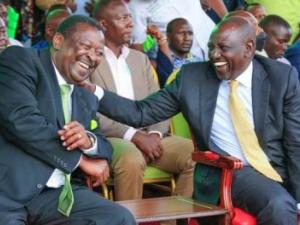 Musalia Mudavadi has asked supporters from his Western Kenya base to vote out United Democratic Alliance (UDA) candidates vying for various seats in the region.
UDA is a political outfit associated with Deputy President William Ruto who, incidentally, is Mudavadi’s political partner ahead of the August 2022 polls.

Speaking at a rally in his Maragoli dialect, Mudavadi, the Amani National Congress (ANC) party leader, instead urged his supporters to vote for candidates allied to his political outfit.
“I have a deal with Ruto, but that is only for the top positions (in government),” said Mudavadi.
“When you go to Sugoi (Ruto’s backyard) the candidates likely to be elected are from UDA. So why should they deny me a chance to elect ANC candidates here?” He posed.
“Let’s tell each other the truth. Please do not deny me ANC aspirants here,” he said, amid applause from the crowd.”

As part of the deal between Mudavadi and Moses Wetangula – another Ruto ally from Western Kenya, formed the Kenya Kwanza coalition.
Mudavadi promised a Premier Cabinet Coalition job should the Deputy President win the presidential elections in August 2022.
Additionally, Mudavadi and Wetangula have been promised 30% of all government positions should they deliver 70% of the votes in Western Kenya to Ruto.

Wetangula has separately been promised the National Assembly Speaker slot even though he elected to defend his Bungoma Senate seat.
“Many have asked why I’m defending my seat despite getting a 30% in the Kenya Kwanza government, I am not looking for personal gain the shares we have gotten in the Kenya Kwanza agreement will be distributed in the government,” he said.