We need each other, says Ruto. 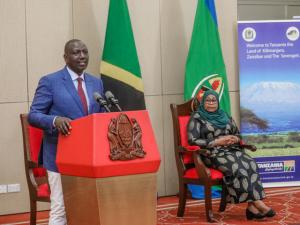 Speaking during a joint press conference at State House in Dar es Salaam, President Samia Suluhu Hassan and her Kenyan counterpart, Dr William Ruto, said it was time to grow the two countries’ economies together and do away with the remaining NTBs by December, this year.

“We started this initiative during the time of former President Uhuru Kenyatta, whereby a team of experts had identified 68 NTBs. So far, 54 have been resolved, and we are left with 14,” President Hassan said.
“We have seen significant development after addressing some of the NTBs. Both countries have directed their respective ministers responsible for trade and investment to make sure that we get rid of the remaining 14 NTBs,” she added.
Trade between Tanzania and Kenya has nearly doubled within a year, with Tanzania now enjoying a surplus.

President Ruto said the foundation of cooperation laid by President Hassan and Mr Kenyatta has played a key role in boosting trade between the two neighbouring nations.
He said in just a year, exports from Kenya to Tanzania rose from Ksh31 billion to Ksh45 billion, while Tanzania’s exports to Kenya jumped from Ksh27 billion to Ksh50 billion.

“You laid a good foundation after you came into office and worked with my predecessor. I intend to build on this foundation together with you so that we can to take our countries to the next level,” Dr Ruto said, adding that he was confident that relations between the two countries would grow by leaps and bounds.
“When you (President Samia Suluhu Hassan) and President Kenyatta were working on barriers to trade, many people thought it would benefit Kenya only, but today it has benefited Tanzania more than Kenya.

“I have come here to underscore that. Increasing trade is where we want to go...we want to more than double trade between the two countries, and it is doable,” President Ruto said.

He assured President Hassan that as soon as the newly appointed relevant ministers are approved by Kenya’s parliament, their first assignment would be to work with their Tanzanian counterparts in eliminating the remaining trade barriers.
“We want our businesspeople to trade better before the end of this year so that we can leverage on our comparative and competitive advantages.”

The two leaders also discussed the proposed $1 billion natural gas pipeline from Mtwara to Dar es Salaam, Mombasa and onwards to Nairobi.
An initial agreement was signed by Mr Kenyatta, and Dr Ruto said implementation of the project was among his top priorities.

“We are going to ensure that whatever the government of Kenya needs to do will be done in a timely, efficient and effective manner so that in the shortest time possible we can access the available gas resources to drive the industrialisation agenda,” President Ruto said.
This, he added, would improve lives and industrial competitiveness, both nationally and regionally.

Tanzania and Kenya have also agreed to cooperate in ending transnational crime, including poaching, human trafficking and drug smuggling.
According to President Hassan, these crimes had an adverse impact on the region’s competitiveness and tarnished the two countries’ image.
“We have agreed to enhance the cooperation that exists between our security agencies so that we can share information, strategies, and be able to deal with these challenges to secure our countries and region,” she said.

President Ruto also commended Tanzania’s decision to join the East African One Network Area (ONA), whose benefits include easier and cheaper communications that would eventually promote ease of doing business in the region.
“I congratulate Tanzania for ratifying this. We are waiting for its operationalisation. I have asked Her Excellency the President to expedite the process so that our people can engage, work together, talk more and do business more,” he said.

Prominent Tanzanian businessman Rostam Aziz said the good rapport between the two leaders heralds a brighter future for the neighbouring countries as far as bilateral relations are concerned.
“I don’t think we have had the leaders of our two countries as aligned as they are now,” he said.

Mr Aziz added that it was heartening to note that presidents Hassan and Ruto had realised that mutual development will be expedited if the two countries cooperate more closely and on equitable terms.
“This requires addressing all petty issues that impede fair trade and investment,” he said.

Tanzania Private Sector Foundation (TPSF) acting executive director Raphael Laizer said President Ruto’s visit to Tanzania would instil more confidence in investors.
“It is an assurance of continuing good relations in terms of trade and investment between the two countries.”

Mr Laizer said the commitment to addressing NTBs was another assurance that would make the business and investment climate even better.
This, he added, would bolster investor confidence, and, by extension, trade between Tanzania and Kenya.

Tanzania Business Community communications director Stephen Chamle cautiously welcomed the two countries’ renewed commitment to promoting trade between them.
He said the promise was welcome, but what mattered most was implementation.
“Government institutions responsible for business facilitation should immediately swing into action if we are to do away with NTBs once and for all,” Mr Chamle said.

Renowned diplomat Ami Mpungwe said President Ruto’s visit to Tanzania would further cement relations between the two neighbouring countries.
“We need to put aside our minor differences, and see how we can cement our trade and economic ties.
“President Ruto’s visit to Tanzania should be an eye-opener for traders and investors to see more opportunities in the region,” Mr Mpungwe said.

University of Dar es Salaam economist Emmanuel Kwayu said the removal of NTBs would set the stage for a conducive business and investment environment.
He challenged Tanzanian investors to invest more in value addition in order to increase exports to Kenya.

“As a country, we need to enhance capacity-building among Tanzanians so that they can tap the available opportunities in the region,” Dr Kwayu said.
https://www.thecitizen.co.tz/tanzania/news/national/we-need-each-other-s...