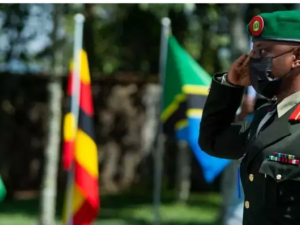 Karuretwa was immediately appointed the head of the newly established RDF International Military Cooperation (IMC), a new department in the Rwandan military.

Shedding light on the new development, Defence and Military Spokesperson, Col Ronald Rwivanga, told The New Times that “RDF cooperates with nations on the continent and beyond in various areas including training, joint operations, equipment and wide range of technologies.”

He added: “This is what is called international military cooperation and defence diplomacy… this office will be fundamentally focused on enhancing this vital activity. Head of IMC is the focal person in this endeavour.”

Based on the government’s assessment of the internal and external security environment, the Ministry of Defence recognises the importance of alliances and cooperation aimed at, among others, promoting collective security arrangements.

The government upholds the tenet of conflict prevention as the foundation of maintaining international peace and security.

Key to conflict prevention is deterrence through defence diplomacy as well as through maintenance of credible defence capability to inhibit potential enemies and adversaries with aggressive intentions.

Defence Diplomacy as part of conflict prevention is an important aspect of Rwanda’s defence mission. It mainly involves actions designed to dispel hostilities, build and maintain trust, and or offer assistance to friendly nations or armed forces in support of peace.

The principle of reciprocity and other diplomatic practices, military cooperation and defence diplomacy focuses on, among others, maintaining an appropriate number of Defence Attachments in selected foreign missions; military exchange programmes; security assistance programmes; and control of small arms in cooperation with neighbouring states.

In UN peacekeeping operations, today, Rwanda is among the top five biggest troop-contributing countries in the world, with over 5,000 RDF peacekeepers deployed in UNMISS in South Sudan and MINUSCA in the Central African Republic.

The country has formalised cooperation in a variety of fields with various nations and organisations.

Who is Brig Gen Patrick Karuretwa?

With a Military career spanning 30 years, Karuretwa who previously served as Principal Private Secretary and Defence and Security Advisor to the President is a graduate of the Fletcher School of Law and Diplomacy in Medford, Massachusetts, one of America's oldest graduate schools of international relations which is well-ranked in its masters and doctoral programs.

Karuretwa has also previously served as an officer in the Republican Guard, and attended several courses including Special Operations and, more recently, the Senior Command and Staff course.

From 1995 to 2000, he was enrolled at the then National University of Rwanda, in Huye, where he studied law.

His service experience in the RDF includes serving as Head of Operations in RDF's Second Division (Northern Province), among others.

Karuretwa was born on November 9, 1974, and is married and blessed with two daughters aged 24 and 15.

He enjoys reading and sports during his leisure time.

He is an avid swimmer and jogger, who holds a black belt in Karate and was once a member of the national karate team.