What next after Samia's waiver of taxes in arrears? 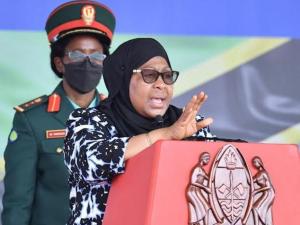 Dar es Salaam. A cross section of Tanzanians have applauded President Samia Suluhu Hassan’s new directive that gives amnesty to outstanding tax arrears saying the move will stimulate the country’s business environment and the economy.
Moreover, “A need for amendments to the tax administration act is inevitable if we are to see its legality,” said Mr Leonard Leopold, Managing and Tax Partner of DKL Consultants when spoke exclusively to The Citizen.
Adding that: “Of course, it is a good move; so, we need to see the said directive become a law for smooth implementation.”

Mr Leopold explained that the Tanzania Revenue Authority (TRA) was established by an Act of Parliament, and that it is responsible for assessing and collecting revenue as stipulated by the country’s law. Therefore, TRA might fail to fully execute the said directive if there is not any legal backing.
According to him, the Act on remission of interest and penalty needs to be amended, and that he is longing to see the government coming with some amendments when unveiling the country’s 2022/23 budget, of which the said remission will be accommodated.

A revised edition of the Tax Administration Act, Chapter 438, stipulates that where the Commissioner General is satisfied that there is good cause to remit interest or penalty imposed under any tax law, he may remit the whole or part of the interest or penalty payable by that person.
Part of the said law reads: “The Minister may, by regulations or order published in the Gazette prescribe eligibility, duration and procedure of accessing the remission provided for under this section.”

Therefore, the positive impact of the President’s tax amnesty needs to be understood by all parties concerned so that it can achieve success and serve as an inspiration for regulators to make tax amnesty policies better.
When reached for comment, Ms Redempta Damian, an independent economist said that the move will motivate businesses that were closed due to outstanding tax liabilities to reopen thus exciting country’s economy.
“Businesses play an important role in stimulating economic activity of any given country, they create jobs which in turn improves people’s living standards. So, the implementation of the tax amnesty is not something new we did in 2018/19,” she explained.

However, Ms Damian cautioned that since section 70 of the Tax Administrative Act deals with remission on interest and penalty, therefore, a legal base is needed to back President Hassan’s amnesty. Adding that: “This (legal base) will help to execute the matter legally.”
On the other hand, Ms Damian is worried saying: “Tax is a primary source of the country’s income, but if the amnesty is to be applied from the 2022/23 fiscal year, then the government need to re-adjust its budget, maybe they have already done so, otherwise it will be difficult to fully implement the budget.”

Ms Damian explained that to foster economic growth and development, the government needs sustainable sources of funding for health, education, infrastructure, and other services in order to achieve the common goal of a semi-developed country.

For his part, Mr Paul Makanza, the chairman of the Confederation of Tanzania Industries (CTI) commended the move, saying: “Since the commencement of the current government, there are creditable changes with regards to TRA, it is now ‘a customer-friendly’ institution.” According to him, businesses were experiencing tax related challenges especially when one was already assessed and paid the required amount after which a tax clearance certificate is issued, yet TRA would later come for a re-assessment.
It is said that in the past, many investors were forced to close shops due to huge outstanding tax arrears coupled by interests and penalties which were in one way, or another attributed by re-assessment.

Therefore, Mr Makanza said: “The President’s directive is a huge relief to the country’s business communities. The president has been serving as the ‘Chef Marketing Officer’ in terms of attracting investments, so the need for conducive business environment is very important.”
He added: “As the private sector, we really appreciate all efforts undertaken by the President which has provided us with a friendly business environment and we promise to cooperate thus contributing to national wealth and development.”

According to an online article by the World Bank on ‘Why tax rates matters’, indicates that the amount of the tax cost for businesses matters for investment and growth. Where taxes are high, businesses are more inclined to opt out of the formal sector.
The article further explained that higher tax rates were associated with fewer formal businesses and lower private investment. Therefore, keeping tax rates at a reasonable level can encourage the development of the private sector and the formalization of businesses.

Part of the article reads: “Modest tax rates are particularly important to small and medium-size enterprises, which contribute to economic growth and employment but do not add significantly to tax revenue.”
For instance, typical distributions of tax revenue by firm size for economies in Sub-Saharan Africa (which Tanzania is part of) indicates that micro, small and medium-size enterprises make up more than 90 percent of taxpayers but contribute only 25–35 percent of tax revenue.

Therefore, imposing high tax costs on businesses of such size might not add much to government tax revenue, but it might cause businesses to move to the informal sector or, even worse, cease operations.
While in her official tour to Kagera region, President Samia Suluhu Hassan directed TRA to ‘stop troubling’ businesses by correcting the said outstanding tax arrears except from those beginning last year as they are responsible for the undesirable situation.
https://www.thecitizen.co.tz/tanzania/news/national/what-next-after-sami...