When Kenya Is Grieving, It Goes As far As Our Country – Kagame 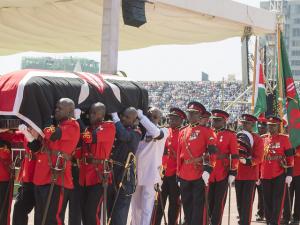 President Paul Kagame has told the people of Kenya that whatever happens to them, good or bad, it also affects Rwanda.

The president on Tuesday, February 11,2020  was speaking at Nyayo Stadium in Nairobi where he joined President Kenyatta and Heads of State of Djibouti, Saharawi, South Sudan, Uganda and the President of Ethiopia for the State Funeral Service of the late President Moi.

Kagame further expressed the affinities between people of both Rwanda and Kenya.

“When the people of Kenya are grieving, it goes as far as our country and our people join you in the grieving. And if Kenyans succeed and make progress we also share in that,” he said.

“We will continue to be with you as we all remember this gallant leader, one of the gallant leaders of this great country of Kenya, and May God accord him eternal peace.”

Thousands of Kenyans flocked Nyayo stadium in the capital Nairobi for the funeral service that was characterized by military honours including 19 gun-salutes.