WHO: Ebola vaccine candidates to be shipped to Uganda next week 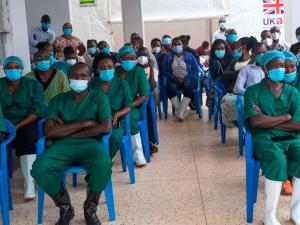 The candidates include vaccines under development by the University of Oxford and Serum Institute of India, Sabin Vaccine Institute, International AIDS Vaccine Initiative and Merck & Co Inc (MRK.N).
The global health agency's committee of external experts has evaluated and agreed to include all three vaccine candidates in the planned trial, Tedros said.

The virus circulating in Uganda is the Sudan strain of Ebola, for which there is no proven vaccine, unlike the more common Zaire strain that spread during recent outbreaks in neighbouring Democratic Republic of Congo.

No details
The WHO did not disclose details about the number of doses expected to be shipped or used in the planned trial.
"We have received confirmation from the developers that a sufficient number of vaccine doses will be available for the trial and beyond, if necessary," WHO's Ana Maria Henao-Restrepo said.

Tedros added that the expert committee had selected two investigational therapeutics for Ebola and a planned trial design, which was being submitted for approval.
With six more Ebola cases and two deaths confirmed in Uganda in the last week, the total number is now at 141 cases and 55 deaths, according to Tedros.
https://www.theeastafrican.co.ke/tea/news/east-africa/uganda-to-get-ebol...