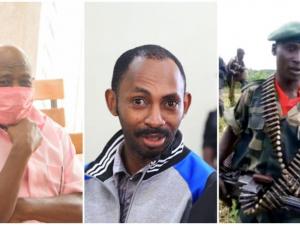 The High Court Chamber for International and Cross-Border Crimes located in Nyanza district, on Tuesday, January 26, postponed the substantive trial of 20 terror suspects linked to MRCD and its military wing FLN to February 17.

Tuesday’s session was held virtually, with the accused who are based in Nyarugenge Prison attending online. However, none of their respective lawyers was present.

The trial involves among others, Paul Rusesabagina, the political figurehead of the militia group and its successive spokespersons Callixte Nsabimana and Herman Nsengimana.

They include Félicien Nsanzubukire (also known as Fred Irakiza), Anastase Munyaneza, and Jean-Chrétien Ndagijimana (son of the late FLN commander Laurent Ndagijimana, also known as Wilson Irategeka), among others.

The group is jointly charged with criminal offences including terrorism, financing terrorism, conscription of child soldiers, kidnapping, arson, and forming terror groups, among other charges.

Speaking to The New Times, the Spokesperson of the Judiciary, Harrison Mutabazi, noted that the court's decision to adjourn the hearing was based on the Covid-19 preventive measures in place.

“The substantive trial could not take place today because the accused were not able to get in touch with their respective lawyers, when it is their right to do so, owing to Covid-19 guidelines in place,” he told The New Times on Tuesday.

The current Covid-19 preventive measures among others restrict movements and access to detention facilities.

The restriction of movements between districts also on one hand prohibit the attendance of those seeking reparations most of whom based upcountry especially in Rusizi, Nyamagabe, and Nyamasheke districts.

The parties seeking reparations are family members of victims of the atrocities committed by the accused during their incursions into Rwanda in and around 2018.

Concerning the court’s decision to schedule the hearing at the hall of the Supreme Court located in Kigali, Mutabazi said that it is in bid to ensure social distancing once all concerned parties will be present at the trial.

According to Gatera Gashabana, the lawyer of Rusesabagina, the postponement will help his client to do necessary preparations ahead of the trial.

“The adjournment will help us to get ample time to prepare for the hearing, and we hope that the court will also use this time to examine and consider a request we had made to them about some challenges that my client is facing, for instance, not accessing some essential documents to help him prepare for the trial among others,” he explained.

Rusesabagina and the remaining 19 suspects are all allegedly responsible for making incursions in south-western Rwanda in 2018, where at least nine people were killed, leaving many others injured.