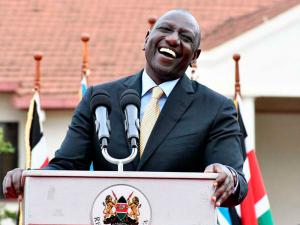 William Ruto took the oath of office as the fifth president of Kenya witnessed at a packed stadium witnessed by over 20 Heads of State.

Judiciary Chief Registrar administered the two oaths in the presence of Chief Justice Martha Koome in line with constitutional requirements.
President Ruto took two oaths – one pledging allegiance to the Constitution and the second is the solemn affirmation of due execution of the office of president.

List of presidents who graced Ruto’s swearing-in ceremony
The first oath was the oath of allegiance means to bear true allegiance to the Republic of Kenya and that they will support and uphold the Constitution of Kenya as by law established.

The second oath was the oath of the office is the clause that enjoins the new president to affirm that he “will to the best of my ability, preserve, protect and defend the Constitution of Kenya”.
Interior Cabinet Secretary Fred Matiang’i had declared Tuesday, September, 13 Public Holiday to enable Kenyans to attend the swearing-in ceremony.

William Ruto was declared the winner by the electoral commission with50.49 per cent votes beating his closest challenger, Azimio’s Raila Odinga, who managed 48.85 per cent of the votes cast and the Supreme Court upheld his election after dismissing election petitions challenging his win.
https://nairobinews.nation.africa/why-president-ruto-took-two-oaths/