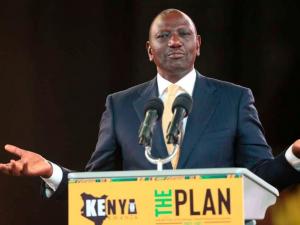 The Supreme Court Monday afternoon upheld the election of William Samoei Ruto as Kenya’s fifth president, summing up the meteoric rise of a man who defied his boss and the sitting administration to be the country’s youngest Head of State.

Dr Ruto is the deputy president in the Jubilee administration and leader of the United Democratic Alliance, on whose ticket he contested the presidency under the Kenya Kwanza Alliance.

Born in Sugoi, Uasin Gishu County in 1966, Dr Ruto began his education at Kamagut Primary before joining Wareng Secondary School and later Kapsabet Boys High School. He attended the University of Nairobi, where he graduated with a BSc in Botany and Zoology in 1990, before attaining MSc and  PhD in 2011 and in 2018 respectively.

After serving as Eldoret North MP from 1997, Ruwas in 2013 Uhuru Kenyatta’s running mate. They won the election and he became the first deputy president under the 2010 constitution.

In October 2014, he served as acting President when Mr Kenyatta briefly relinquished power to attend to his criminal case at the International Criminal Court at The Hague.

Dr Ruto was a co-founder and member of the Youth for Kanu 1992 (YK92), a grouping that campaigned for the late President Daniel Moi in the 1992 General Election.

Dr Ruto served as an assistant minister in the Office of the President and then towards the 2002 elections which Kanu lost, he was promoted to Minister for Home Affairs. He also served as Minister for Agriculture and Higher Education in the grand coalition government from 2008.