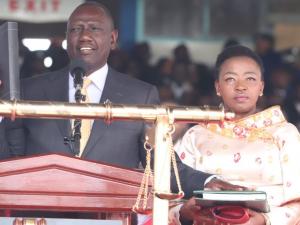 Dr William Ruto has been sworn in as the fifth President of Kenya at Kasarani International Stadium in Nairobi.

Dr Ruto took the Oath of Office at 12.44 pm in a swearing-in process led by the Judiciary under Chief Justice Martha Koome and the registrar Anne Amadi.
Dr Ruto also received the highest award in the country – Chief of the Order of the Golden Heart.

His deputy, Rigathi Gachagua, was also sworn in shortly after him.

The swearing-in and inauguration kicked off with the entry of President Uhuru Kenyatta aboard the Commander in Chief ceremonial vehicle, after which he inspected a full parade mounted by the Kenya Defence Forces under Lt-Col Gilbert Kinanga’s command.

The event was attended by tens of head of states and diplomats from across the world. They included East African Community presidents among others.
https://www.theeastafrican.co.ke/tea/news/east-africa/william-ruto-sworn...