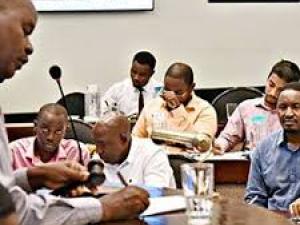 The pace of poverty reduction, especially in the country’s urban centers, has slowed down, casting doubts on the country’s ability to achieve its target of cutting poverty down to three per cent by 2030.

“Even though Kenya’s poverty numbers are reducing, it is not at the ideal pace. Kenya is not on track. If Kenya continues on its current growth path, poverty will remain above 20 per cent by 2030,” said Mr. Peter Chacha, a senior macroeconomist a the World Bank’s Trade and Investment Unit, in Nairobi last Wednesday during the release of this year’s "African Pulse", the biannual analysis of the macroeconomic outlook for Africa. It is published by the World Bank/IMF.

This year, it cut growth forecasts for the region's key economies from an anticipated 2.8 per cent projected in April to 2.6 per cent, adding that the future does not look bright since external trade wars have shrunk foreign direct investment, while climatic shocks and the slow pace of domestic reforms aggravate Africa’s troubles

The bank also launched the "Accelerating poverty reduction in Africa" report, which noted that 416 million people on the continent (about 14 per cent) live below the poverty line, meaning they have less than $1.90 (Sh197) to spend per day.

The report also notes that, from a global perspective, the highest concentration of poverty has shifted from South Asia to Africa, and that nine out of every 10 poor people in the world will be living in Africa by 2030.

This means that although the proportion of Africans living in extreme poverty fell 54 per cent in 1990 to 41 per cent in 2015, more Africans are living in poverty today than in 1990.

A quarter of Africa’s poor (85.2 million) live in Nigeria, the new report indicates. It adds that the Democratic Republic of Congo, Tanzania, Ethiopia, and Madagascar host next larges quarter of poor people, with Mozambique, Uganda, Malawi, Kenya, and Zambia hosting the next 25 per cent.

Although the report said 82 per cent of the poor live in rural areas, are farmers and in fragile and conflict-affected regions, a report released by the bank in February showed that Kenya’s problem lies in urban areas.