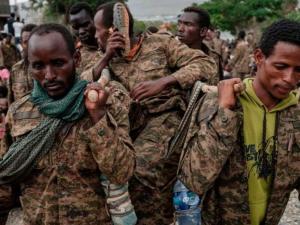 Addressing members of the press after the regular Council of Ministers in Juba over the weekend, Information Minister Michael Makuei said President Salva Kiir would never support the rebel group, citing Ethiopia’s support during South Sudan’s liberation struggle from Sudan is unforgettable.

“The people and the government of Ethiopia all these years have been standing with us, and without Ethiopia's government support, we would not have been independent today.

“So, there is no way we can say we are supporting the rebels to overthrow the system in Ethiopia. Not only that, but also what are our resources? If we are unable even to graduate our forces now because of the absence of arms, should we give arms to the rebels and leave our forces?” he said.

The Information Minister added that Abiy’s regime should hold to account the people selling arms to TPLF.

Two weeks ago, PM Abiy defended his frontline actions and declared ‘victory’ over the TPLF.

The premier’s office said that his actions did not negate the need for peace, just that his forces were pushing back against a group he labelled terrorist.

When the national forces first launched attacks on TPLF in November 2020, Abiy declared an end to the operation five weeks later, but the fighting continued.

By late June, the rebels had retaken most of Tigray, including Mekele. TPLF has in recent weeks claimed they were on a march to Addis Ababa, raising the urgency of calls for a ceasefire.