Rutsiro: 54 cement bags for the needy in Nkira cell have been reported missing; cell leaders behind the scam 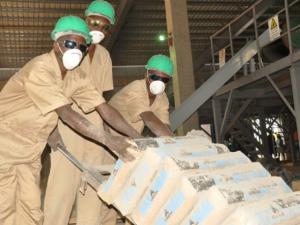 On April 17, 2020, in Nkira cell in Boneza sector Rutsiro district; the administration seized three bags of cement that were covered with three other parts, which had been smuggled. The cement was in a government program to build houses for the needy in Nkira cell. An investigation led to the discovery that 54 bags were missing in the cell.

Some residents of Nkira cell who spoke to Isangano radio preferred to be kept anonymous   narrate the story of how the cement has been smuggled.

“The cement was coming from the district office the cell; there was a real person who would be in charge of the construction. The In Charge of construction and Cell Executive Secretary “gitifu” are the one who sold it. The rich people would go out of their way to buy it in the villages. “Said one of Nkira cell residents

Uwiringiyimana Jean De Dieu, executive secretary of Nkira cell, said the cement's loss was due to chief of the construction.

"The cement has come out of the store taken by the mason , because we used the motobikes to get to the building site, the chief of construction  would tell the motorist  where to put the cement, the rest may have to been sold by the motorist," he said.

As for what the residents of the cell say that the executive secretary was part of the cement smuggling scam of Uwiringiyimana denies it.

"As a store manager, it’s normal to be suspected for such scam, however, we are not part of it," he said.

Boneza sector executive secretary Niyodusenga Jules said that after a door to door inspection on suspected homes, more than 50 bags of cement were missing.

“We carried out an inspection and discovered three bags and three other parts kept by different people, so we had to take those people to explain how they got the cement and where they got it from,” he said.

We submitted them to RIB. We then inspected the cell warehouse and found that there were 54 bags with no explanations. It is RIB that has the case file, perhaps sooner the role of the cell administration or anyone else will be revealed, ”he said.

Currently, one bag of cement in Rwanda costs at least 11,000 Rwandan francs. This means that the 54 bags stolen from the Nkira cell were meant to accommodate the needy, valued at just over 590,000 Rwf.