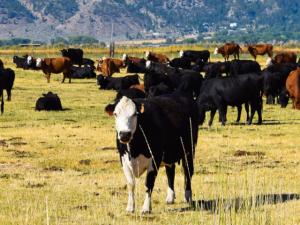 Dar es Salaam. The Usangu Ranching Association (Uraa) has distanced itself from operations that restrict water flow to the Great Ruaha River, threatening to sue Deodatus Balile, who had linked them with saga.

Earlier this week at an environmental event graced by Vice President Dr Philip Mpango in Iringa, Mr Balile who is the Tanzania Editors Forum (TEF) chairman, said there were 12 families that own the Usangu ranch, which restricted the flow of water to the Great Ruaha leading to environmental degradation.

Following the revelation by TEF, Dr Mpango said the government would take legal action against climate and environment “criminals”, regardless of their status.
Speaking to this paper over the phone yesterday, the Uraa secretary, Dr Emmanuel Swai, said since its inception, the said ranch has never affected the flow of water in the Ihefu valley and the Ruaha river as a whole.

“In truth, we don’t own it per se; the ranch is owned by Narco [National Ranching Company Limited], and we have subleased the 16 blocks. The property is located in an arid region with barely 300-600 millimetres of rain per year,” he explained.

According to him, the few rivers that run through the area are small and seasonal, with water flowing only during the rainy season (January to May), which means there is no water for six to seven months out of the year.

Therefore, to meet water demand for the ranch, the Uraa secretary said: ““We have drilled both shallow and deep wells, and we also have some ponds that serve as sources of water for humans and livestock in this ranch.”
Dr Swai explained that individuals who won the tender paid surveying fees for the blocks, which were thereafter sub-leased for a 33-year period beginning in 2007.

He added: “Therefore, the continued investment at Usangu Ranch adheres to a predetermined business plan with environmental protection in mind, which is reviewed annually by the property owner - Narco.”

The Uraa boss further noted that all cattle introduced into the ranch follow government procedures which includes the issuance of livestock movement permits.
On the other hand, Dr Swai insisted that the local investors are known to the government as they do pay tax and levies related to land and other service charges, and that the Uraa is not owned by 12 families.

The list, which this paper has seen but cannot independently verify, includes the names of top politicians and leading enterprises in the country. Therefore, said he in a statement which The Citizen has a copy: “Uraa demands a statement withdrawal and an apology from Mr Balile, otherwise the association will seek legal action against him which include asking him to confirm his accusations made against us.”

When reached for comment, Mr Balile said: “Tell them that the government notice No 28 cancelled the said ranch, but it was reinstated by a committee of eight ministers, they should first respond to that.”

Mr Balile added: “In their press release, there is a clause ‘currently,’ what does it mean? Are they certain that the ranch is operating in line with its business plan? Are they ready for a special audit?”

The said clause was referring to when Dr Swai said ‘currently,’ no minister, Member of Parliament or Judge who owns any block in Usangu Ranch.
According to Parliament Hansard, Usangu ranch encompasses 43,727 hectares divided into 16 blocks ranging between 2,000 and 3,000 hectares. The cabinet circular number 2 of 2002 states that the blocks have been leased to local investors for the development of modern and commercial breeding in order to have productive breeding.
https://www.thecitizen.co.tz/tanzania/news/national/usangu-ranch-distanc...